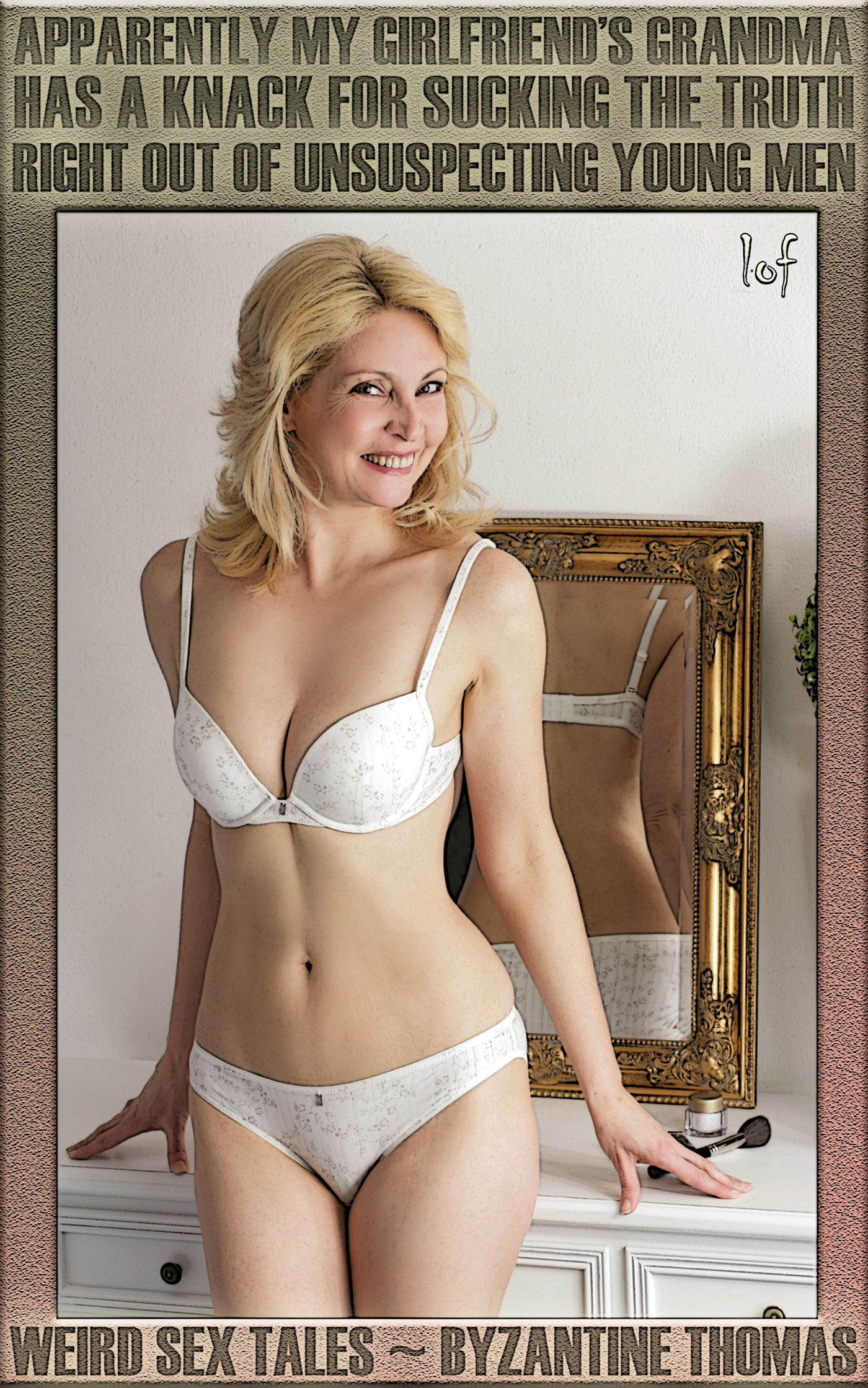 Weird Sex Tales: Apparently My Girlfriend’s Grandma Has A Knack For Sucking The Truth Right Out Of Unsuspecting Young Men by Byzantine Thomas

Did you know a compulsive liar’s worst enemy is a sexy old lady with a knack for sucking the truth out of unsuspecting young men?

“Why don’t you have a seat here with me.”

“Um. I’m okay. Here.” He gulped back his nerves a little, feeling himself already starting to perspire, especially when he realized he may or may not have still been packing some serious heat in the shape of a big bulge in his jeans, which, as it turned out, he was, which really made him pissed at himself, especially since there was absolutely no doubt his girlfriend’s grandma had noticed.

“Are you? Standing there? With your legs so tired?” She raised her eyebrows. “From doing whatever you’ve been doing down in the basement with our sweet little Rachel?”

“Well. I’m afraid I’m going to have to insist. Please. Sit down. Right here next to me.” She patted the bed next to her.

“Okay…” He nodded, and complied, feeling a bit silly.

“Good. You stay right there.” Angela suddenly got up and walked over to her bedroom door and closed and locked it.

Seeing this, Kurt gulped yet again.

Then, Angela, on her way back over to the bed, she stopped at her dresser and slid her robe off, revealing her nearly naked, surprisingly shapely, surprisingly slim body, wearing nothing but a white bra and panties. She gave Kurt a big smile.

Kurt smiled politely back at her.

Then, Angela headed back over and sat down right next to him, and when she did, she set her hand on the big bulge in his jeans. “Kurt, you don’t mind if I put my hand here, do you?”

“Um. No.” He gulped one last time, scared even more shitless than before.

“Oh, but I think you do,” she said and gave his bulge a light squeeze.

“Kurt?” She gave another maybe not so light squeeze this time. “Rachel told you about me, didn’t she?”

“Um. No.” He struggled to maintain his polite smile.

“Honestly, Kurt.” She smiled back at him, as she started to massage his big bulge. “There really is no reason for you to even try and fight me on this.”

“Oh, please…” she said, rolling her eyes and shaking her head, as she kneaded his big bulge even harder. “You’re fighting me every step of the way.”

“Then, I suppose you wouldn’t mind if I let this big boy out?” she said, as she started to undo his jeans. “Would you?”

“Nope…” He sighed heavily, as his big thick cock suddenly sprung free from his unzipped jeans. However, it was only free for a millisecond, as she immediately wrapped her extremely soft and smooth fingers around it. “Not at all…”