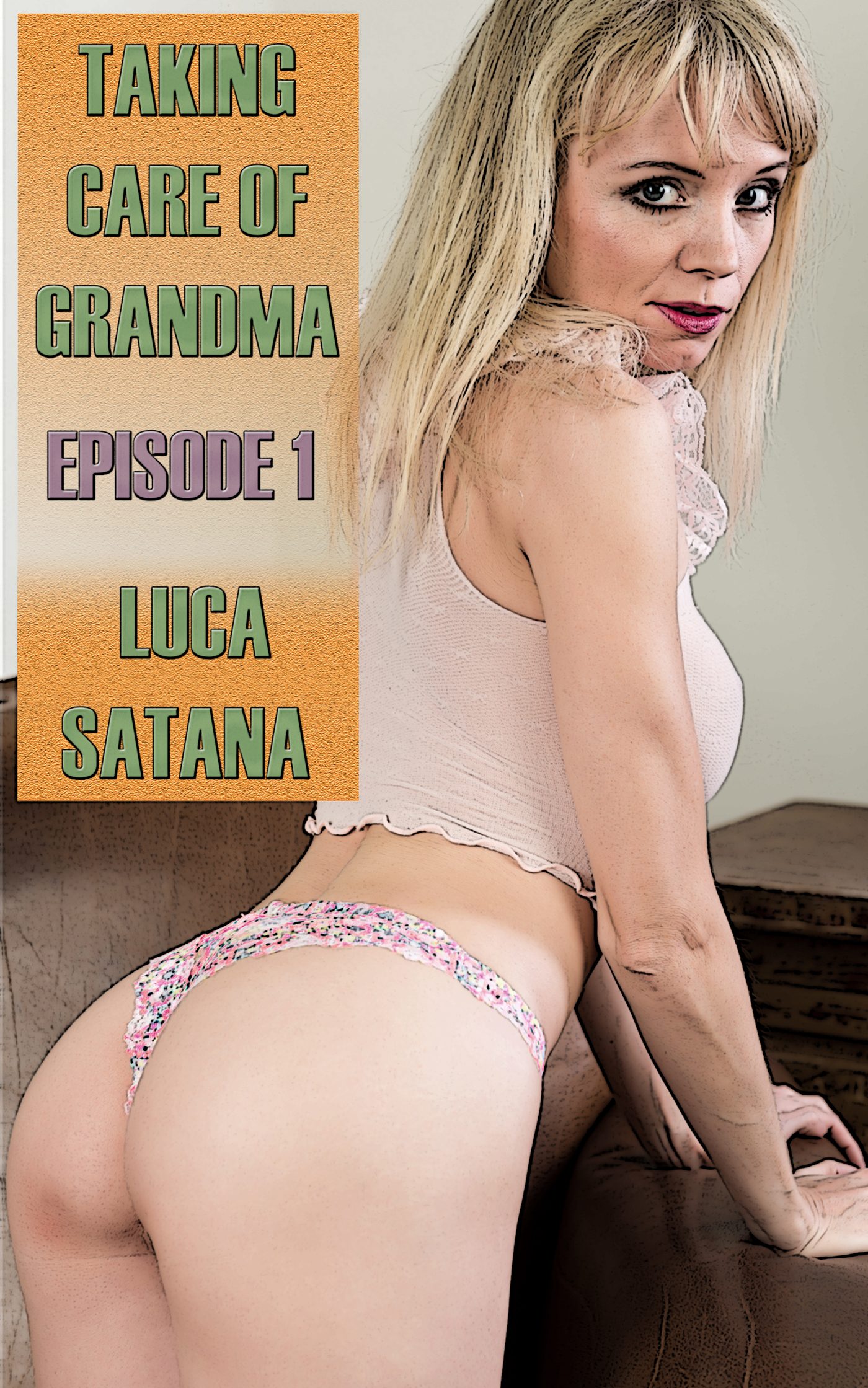 Upstairs in Grandma’s room, I was standing there while Grandma glanced over her waterfall of clothes. As she looked through her things, she slowly unbuttoned her white jacket. “I just adore this top, but I’m not happy with this bra at all,” Grandma said, with her back still turned.

I stood by, wondering if I should go.

Then Grandma leaned over a little bit to one side and, similar to Houdini, or someone like that, managed to escape from her bra, pulling it free and sticking it somewhere in the deep of her thick wardrobe. “To tell you the truth I haven’t been wearing bras very much, lately. And if you don’t mind, I rather not wear one tonight, either.”

“I have to say, Emery, dear, I had a sneaking suspicion you wouldn’t,” Grandma said and smiled and winked back at me, before she turned completely around toward me, causing her jacket to open up, revealing more of her sheer top and most of her perky little breasts and beaming pink nipples. “You forget, I probably know you better than you know yourself.”

I smirked, wondering what she meant by that, as I tried to avert my eyes from my Grandma’s boisterous boobs and nipples.

“And besides, it’s not as if my tits are all that noticeable,” Grandma said, stopping and peering down at her tits, as she held her jacket open and wiggled and jiggled her breasts some more. “Wouldn’t you say?”

“Um,” I said, wishing Grandma would just put her bouncy tits away already, and yet, at the same time, wishing she wouldn’t, which totally grossed me out. Meanwhile, my cock, acting completely independent of me and whatever I might be thinking, started to grow and firm up.

My Grandma noticed right away. She was very keen that way. Very observant. And yet, thankfully, she pretended not to notice. Instead, she gave me a quick half-smile, and then looked around. “Emery, honey, where’d you put your duffle bag?”

“In the guest bedroom?” I said, unsure.

“In the guest bedroom?” Grandma repeated incredulously. “Sweetheart, is that really where you wanna sleep?” Read More

Once I was behind the wheel, it took me a couple blocks to get used to Grandma’s car.

“The point?” I repeated, slightly amused.

“Yeah. Where couples go to make out.”

“Hardy har har, very funny.” Grandma smirked. “I guess someone doesn’t wanna get their rocks off in Grandma’s asshole.”

“Well, where do you go with your girlfriends?” Grandma asked.

“I don’t know,” I said, thinking about it. “Parties. Movie theaters.”

“Grandma, I think drive-ins are extinct.”

“You’re no fun. Where’s your sense of adventure? There’s gotta be a nice secluded place where we can pull over and you can fuck me up the ass.”

“Well, I don’t know why I let you drive,” Grandma said and smiled. “You’re not doing any better than I was.”

I tried to focus on the road and grip the steering wheel properly.

“There’s a place!” Grandma shouted and pointed at a church.

“Sure. Why not? The church has been fucking people up the ass for centuries so what’s the harm in you fucking me up the ass at the church?”

We pulled into the church parking lot. Nobody was there. Almost total darkness. The place was surrounded by thick woods. We drove around the back of the building and parked. Before I even turned the car off, Grandma was working on her slacks. She paused a moment and slid off her jacket, as her big breasts and pink nipples settled into place inside her sheer top. My cock started firming at the sight of Grandma’s tits, so close and so bouncy.

“Can you help me with this?” Grandma asked, finally giving up on her slacks.

“Sure, Grandma.” I climbed over and knelt down on the floor in front of Grandma and reached over to undo her slacks.

Grandma looked down at me and smiled. Her dark blue eyes and ruby red lips were shimmering in the moonlight.

Once I got Grandma’s slacks undone, I reached behind her to grab and slide them off, leaving her with her sheer top and skimpy flowery panties.

While Grandma gazed down at me, she settled back and reached her little hand inside her panties and started massaging her wet pussy lips, pulling her hand back out and licking her fingers.

After seeing that, I was rock hard.

“Well? What are you waiting for?” Grandma asked, sucking on her fingers. Read More

In the living room, Grandma was meeting and greeting her guests.

I was happy to see Grandma at least put on a robe. A silky white one with some white puffy frills. A very Grandma-style article of clothing.

The first thing I noticed about Miranda was how surprisingly beautiful she was. It was difficult to pinpoint her age. Probably somewhere in her early forties, or possibly early fifties. She was taller than grandma, by a few inches. And very skinny. She had dark features. Brown eyes and brown hair. A glamorous look. With ample makeup and shiny earrings. She was also wearing a robe. A silky black one.

When she got the opportunity to do so, Miranda flashed me a very friendly smile.

Then Harold dawdled in. After seeing him, I think Grandma was being nice when she was describing him. He was old. Plain and simple. Maybe in his late seventies or late eighties. His face was in a constant droopy glower, as if his life was nothing but one miserable event after another. He wore thick glasses and hearing aides. He was a few inches shorter than Miranda. And he was a little portly. And yet, his old clothes, which included a dress shirt, a vest, and slacks, all in earthy tones, didn’t seem to fit, as they hung down on him.

“Mind my watch. My glasses…” Harold muttered to no one in particular.

Not sure what else I should be doing, I decided to approach them.

“Oh, Emery, there you are,” Grandma said.

“Hello,” Miranda said to me and smiled and extended her hand.

I obliged her. “Hello.” Then I glanced over at Grandma.

“Why don’t you be a good boy and take Harold,” Grandma said.

“Just sit him down,” Miranda said and smiled again.

“Now, let’s get ready for our dessert,” Grandma said to Miranda and smiled.

“Absolutely,” Miranda said and smiled at me. Read More

As soon as Harold and Miranda were out the door, Grandma pushed the door shut and turned to me. “I thought they’d never leave,” Grandma said, rolling her eyes.

“Grandma?” I smirked. “I thought Miranda was your best friend?”

“Oh, don’t get me wrong, I love Miranda to death, although, I’m finding out she can be a bit of a cock and balls hog, if you know what I mean, but it’s that deplorable ghoul she calls a husband I absolutely cannot stand.” Grandma stuck her tongue out in disgust.

“Well, at least you finally found a way to shut him up.”

At that, Grandma shrieked with anger. “Not another word about it!” Grandma nearly shouted as her eyes almost burned me down to the ground. “Emery! Not! Another! Word!”

I froze where I stood. Completely perplexed. And not to mention scared out of my mind.

Grandma was little but, man, when she felt like it, she could instill some serious fear into you, especially with those flame-throwers for eyes. There must have been something deeper going on, because Grandma’s hatred for Harold wasn’t your usual hatred, it was some kind of white-hot seething hatred. I can only assume that’s why it really burned her up to have to blow him down.

In the midst of my deliberation, Grandma disappeared, and not even a second later, I heard her dust-buster going off. I turned and watched as Grandma feverishly vacuumed the couch cushions of any lingering traces of carrot cake.

Grandma could really be a meticulously rabid cleaner. Her house was always absolutely spotless. I guess that’s why I was so surprised to see her guest bedroom in the state it was in. It really must have drove her nuts to know she had a room in this house that was in total disarray. I really needed to help her with it. It probably would alleviate her of some serious stress. So, as soon as she wanted, I promised myself I would comply willingly and happily. I just hope she didn’t want to get started on it now. I was quite tired. Coming like, I don’t know, 4 or 5 times in as many hours really drained me, in more ways than one. I’ve never come so much and so often in my life.

“Emery, honey, why don’t you go upstairs and run us a bath before bed.”

“Sure,” I said, turning for the stairs. “Sounds good.”

“Oh, Emery, before you go?” Grandma stood up to face me.

“Thank you for a lovely time tonight. You handled yourself like a perfect gentleman. And I think you and Miranda really hit it off. Don’t you?”

“Awesome. Yeah.” Grandma smiled. “Now, hurry up and go run that bath. Grandma’s wants to get extra clean. Hopefully you will oblige.”

“In return, Grandma will get you extra extra clean.”