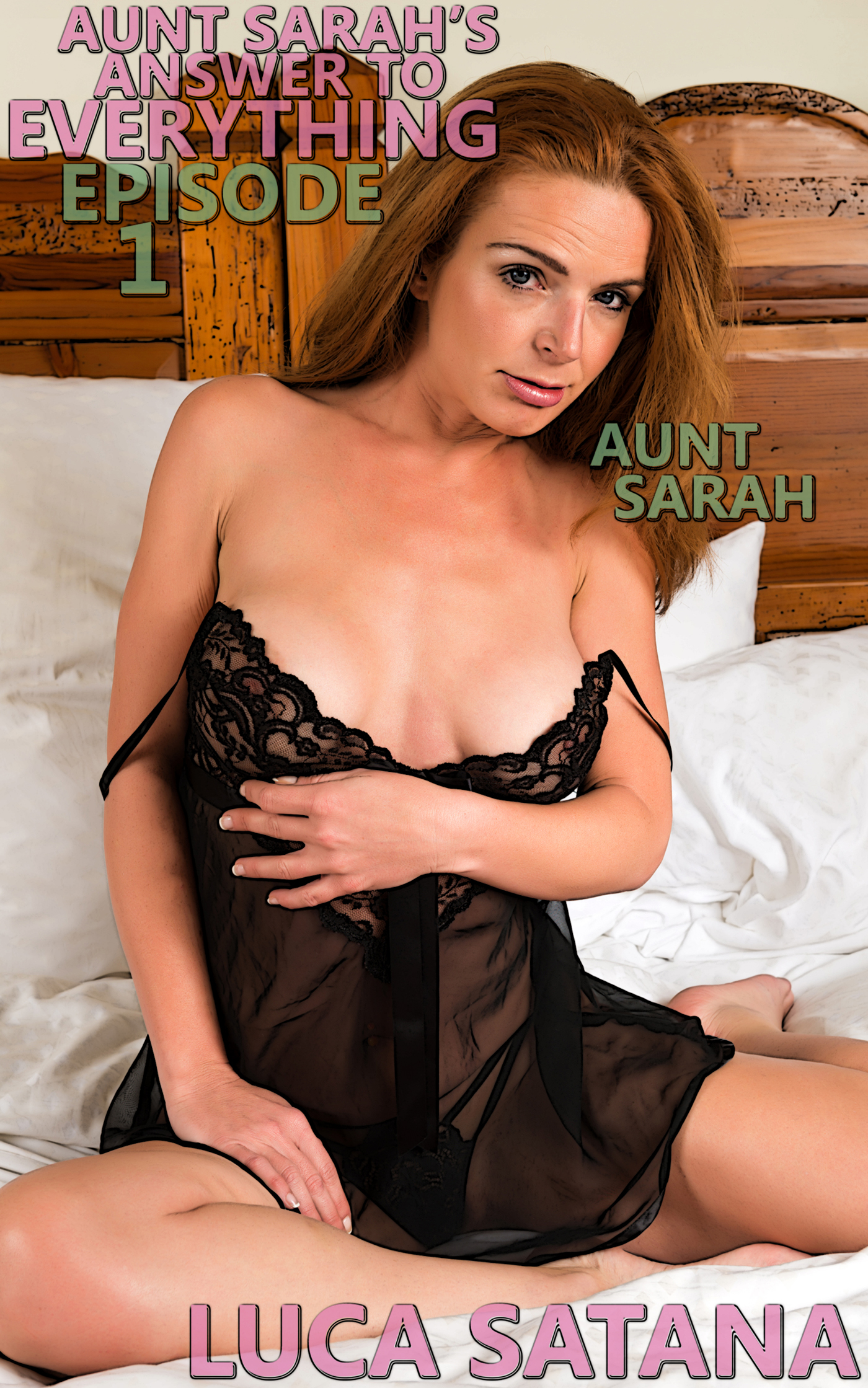 Aunt Sarah’s Answer To Everything by Luca Satana

Guy Huffman was a handsome 42-year-old man with blue eyes and dark hair. Average height. Average weight. He was a good man. Fair. Even-keeled. And always a good provider. However, sadly, that was about to change, as Guy’s life slowly crumbled all around him.

Early in the year, he lost his job. Unable to readily find work, Guy had no choice but to go back to school to change his career. Guy was going to have to lean heavily on his wife’s income. As a result, they were having a terrible time making ends meet. So bad, in fact, his wife Wendy had had enough and after 23 years of marriage ran off with Guy’s best friend Charlie. Soon after that, Guy fell into a mental tailspin, unable to do much of anything, until he was in a full-blown, crippling depression.

And so, it began. Guy Huffman’s new life.

Aunt Sarah’s Answer To Everything: Episode 1

It was a warm summer midmorning, with the bright sun shining.

Before Guy and Megan reached the front door, the door opened, seemingly on its own, as no one was there. Guy and Megan looked at each other. Guy put a bag down and pressed lightly on the door.

Right inside, Periwinkle, a very cute blonde in a t-shirt and cut-off jeans, was standing up against the wall and busily texting.

“Hi…What exactly are you to me?” Periwinkle asked, not even looking up from her phone.

“Oh. No. Not you. My friend is being a bitch.” Periwinkle walked off.

Guy and Megan looked at each other again.

A few minutes later, Guy and Megan were putting the last of their things inside the house. As soon as they finished, they looked up and saw Aunt Sarah, standing there in a black mostly see-through negligee and black panties. Guy couldn’t help but notice her large breasts and beaming pink nipples.

“All right, all right. That’s the first and last time we’ll be mentioning your ex-wife.”

Aunt Sarah’s Answer To Everything: Episode 2

“Having fun?” A woman’s voice said lightly in Guy’s ear.

Guy opened his eyes and found his cousin Heather’s pretty smiling face hovering there next to his. The rest of his cousin was crouching down next to his aunt’s bed. She was just as beautiful as she always was. Just older. Thicker. But in all the right places. She had her mother’s blue eyes and bright auburn hair. She was wearing a striped tank top and jeans.

Guy’s eyes widened, as he realized a millisecond later his Aunt Sarah was still fast asleep on top of him.

“Relax. You’re fine,” Heather said. Then she stood up. “Mother? If you’re planning on going to work, you better hop in the shower.”

“Oh. Okay, dear,” Sarah said, lifting her head from Guy’s chest and smiling down at him.

Then Sarah slowly slid off her nephew’s body and stepped onto the floor. “You wanna join me?” Sarah asked her daughter.

“I can’t,” Heather said, reaching over Guy to grab her mother’s panties, inadvertently uncovering his enormous sleeping cock in the process, as she pulled her mother’s panties back with her and stood up. “I have to get ready for Peri’s birthday party tomorrow.” Heather eyed her cousin and his cock, giving him a smile.

Aunt Sarah’s Answer To Everything: Episode 3

In Tom and Heather’s room, Guy was sitting at the computer, while Heather finished putting away the laundry. When Heather was done, she stood up and let out a sigh. Then she glanced back at Guy.

“Any luck?” Heather asked, craning over his shoulder.

“Yeah. You can thank Tom for that. He goes to all kinds of nasty sites. I’m sure our computer is loaded with viruses,” Heather said, rolling her eyes. “I don’t even go online anymore. If I need to go online, I use the one at CCC.”

“Concord Community College. Where I go to school.”

“Yeah, I’m gonna be a rad tech.” Heather rolled her eyes. “Well, in about 8 months, if all goes as planned.” Then she spun away and fell back onto her bed.

“Very cool,” Guy said, swiveling the chair around to watch her.

“Yeah, it’ll be nice to finally quit my job at the daycare. Getting up at the ass crack of dawn is not exactly my cup of tea. And it’ll also be nice to maybe get paid a decent wage for once in my life. And maybe finally get out of here.” As she talked, Heather lied back on her pillows and tugged on her tank top, exposing much of her belly, exposing even more as she scooted back, which caused her loose jeans to drop down over her big hips.

“I remember you wanted to be a doctor. Whatever happened to that?” Guy said, standing up and walking over to her bed and sitting down.

“I’m hot?” Heather said, unbuttoning her jeans and pushing them down and kicking them off her and then off the bed, leaving her in her tank top and white panties.

Aunt Sarah’s Answer To Everything: Episode 4

Guy was wandering through the downstairs, into the rarely used connecting rooms, and then he opened the door to the attached barn. And there, just as Heather told him, Guy discovered a big beautiful, lit-up full and fully-functioning and currently running hot tub. Also there, sitting in the tub, were Heather’s daughter Periwinkle, a beautiful and very shapely blonde girl in a skimpy purple bikini, and Guy’s daughter Megan, an even more beautiful and shapely brown-haired girl in a skimpy black bikini. Also there, or, on the other side of the barn, were a few stalls with horses looking on with general indifference.

“Hi, First Cousin Once Removed Guy,” Periwinkle said in an absurd announcing manner and smiled. “Did I get it right?”

“Yeah,” Guy said. Guy was in a pair of black shorts he usually only wore to bed.

Periwinkle suddenly stood up and ran her fingers along the back of her skimpy bikini bottoms, before she turned and reached over the edge of the tub, sticking her big round bottom up in the process, as she took a quick drink of something and sat back down in the water.

Aunt Sarah’s Answer To Everything: Episode 5

“I just had to knock off early,” she said, as she lifted her nightgown up and over her head, leaving her absolutely naked, with her big breasts and huge nipples beaming and her furry red pussy hair.

Guy’s eyes bulged, and so did his cock.

“When the crew chief asked who wanted to knock off early, all I could think to myself was, What am I doing here? My favorite nephew is waiting for me at home and he’s got a 9-inch cock with my name on it!” Sarah said, as she climbed into the hot tub and immediately moved in extra close to her nephew.

“What’s the matter?” Sarah asked, sliding her hand up his inner thigh and right inside the bottom of his shorts.

“Nothing,” Guy said, wincing as his aunt’s fingers wrapped around his semi-hard cock and right away started tugging on him.

“Oh, I know what it is,” Sarah said, as she continued to massage her nephew’s firming cock. “As soon as I left, I bet my daughter jumped into that bubble bath and had her way with you one, two, maybe three times. Am I right?”

Aunt Sarah’s Answer To Everything: Episode 6

As Guy hobbled slowly down the hall to Periwinkle’s room, where he and his daughter Megan were staying, one thing was certain, Guy was in a miserable miserable way.

Well past the buzzing stage of blue balls, Guy’s cock was now just extremely tender and aching with a dull gnawing pain. And that went double for his balls, where, on top of his steady pain, he was also experiencing the occasional shooting pain.

To make matters worse, Guy was also freezing. With nothing on but his soaking wet black shorts, Guy was shivering more and more with every step.

Once Guy was at the bedroom door, he turned the knob and lightly pushed in. With a slight creak, the door opened to darkness, with a few rays of moonlight, which cascaded across the full-size bed, where his daughter Megan was lying half asleep.

Guy hobbled slowly over to the bed. Without thinking, to be rid of his wet shorts once and for all, he slid them down and kicked them off. Then he climbed into the bed.

“Dad?” Megan said lightly, somewhat concerned. “Are you all right?”

“I’m fine. I’ll be fine.” Guy said, lying flat on his back and pulling the covers almost completely over himself.

Megan scooted over closer to her father.

Once he realized how close his daughter was, close enough to tell she was wearing next to nothing, just a skimpy black nighty and black panties, Guy scooted away somewhat abruptly.

“I only wanted to help you warm up.”

“Thank you sweetie, but I’ll be fine.”

Aunt Sarah’s Answer To Everything: Episode 7

This, however, was the exact moment Megan came to, waking with the same concern she fell asleep with, and that was her father’s big sore cock.

And so, as soon as Guy was seemingly settled, lost in a deep sleep, Megan, who was still in her skimpy black nighty and black panties, scooted up to her knees, and ever so slowly and ever so gently stripped away her father’s covers, then his sweat pants, and, finally, his boxers. And once she had, she just stared, in awe, at all her father’s hairy man-meat, first his big sleepy cock and then his big sleepy balls, making her wonder how in the world she was going to tackle all that meat.

Then, almost as if the universe could sense Megan’s trepidations, help arrived, in the shape of her Great-Aunt Sarah, who was standing there in her long semi-see-through white nightgown, accented, in particular, by the very see-through area where her big breasts and beaming pink nipples were, followed by the slightest less see-through area where her pink pussy was, which the mystery of seemed to confound Megan even more than the sight of her father’s hairy man-meat, compelling Megan to search with extreme prejudice, through the material of her great-aunt’s nightgown, for a more definitive explanation of her Great-Aunt Sarah’s pink pussy.

But then, something changed in Megan, as she remembered she was mad. At somebody. Whoever did this to her father and her father’s big sore cock. She wasn’t quite sure who it could be, but there were only so many suspects, and considering her great-aunt was the last person she saw with her father, she had to be the prime suspect. Regardless, whoever it was, Megan was none too pleased with. That’s for sure!

So, then, to demonstrate her anger, Megan made her declaration of war, firing her big brown eyes directly at her great-aunt’s big blue eyes.

To this, Aunt Sarah, as if to answer for her crimes, began to deliver her defense, which amounted to nothing more than softening her big blue eyes ten-fold, and giving her grand-niece the nicest, warmest smile she could muster.