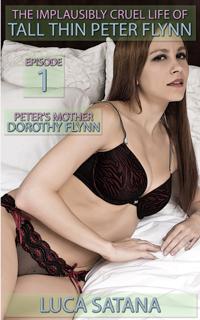 Here are Luca Satana titles from Phase 1 (2014-2016) with best selling series like The Implausibly Cruel Life Of Tall Thin Peter Flynn, A Mother-Son Getaway Gone Wrong, Taking Care Of Grandma, Aunt Sarah’s Answer To Everything, In Addition To Everything Else Going On In My Life Now I Have To Get My Mom Pregnant Too!, Oggy Gobbins Comes Alive and of course Luca’s Naughty Bits.

Become a LOF Member and get access to tons of discount coupon codes.

Aunt Sarah’s Answer To Everything:

Guy Huffman was a handsome 42-year-old man with blue eyes and dark hair. Average height. Average weight. He was a good man. Fair. Even keeled. And always a good provider. However, sadly, that was about to change, as Guy’s life slowly crumbled all around him.

First, early in the year, he lost his job. Unable to readily find work, Guy had no choice but to go back to school to change his career. Guy was going to have to lean heavily on his wife’s income. As a result, they were having a terrible time making ends meet. So bad, in fact, his wife Wendy had had enough and after 23 years of marriage ran off with Guy’s best friend Charlie. Soon after that, Guy fell into a mental tailspin, unable to do much of anything, until he was in a full blown, crippling depression.

And so it began. Guy Huffman’s new life.

So, from now on, if anybody gives a shit, Oggy’s mom, his sisters, and whoever else is around, they’re just gonna have to do it for him, because Oggy has had enough!

Polly has always been a poor sleeper. By the night of her 18th birthday, she was certainly at her worst. Polly needed something. Something to finally give her some much needed sleep. Thankfully for Polly, her parents aren’t above doing whatever they can for their sweet little darling. Including pleasing her before bed. And maybe now, finally, Polly will be able to get some much needed sleep.

My Mom And My Aunt Pretty Much Rule The Bathroom

Mom Can I Please Hump You?:

Leonard, a 32-year-old college student/pizza delivery driver was on what he believed to be a routine delivery when something went horribly wrong…He met the Niceties.