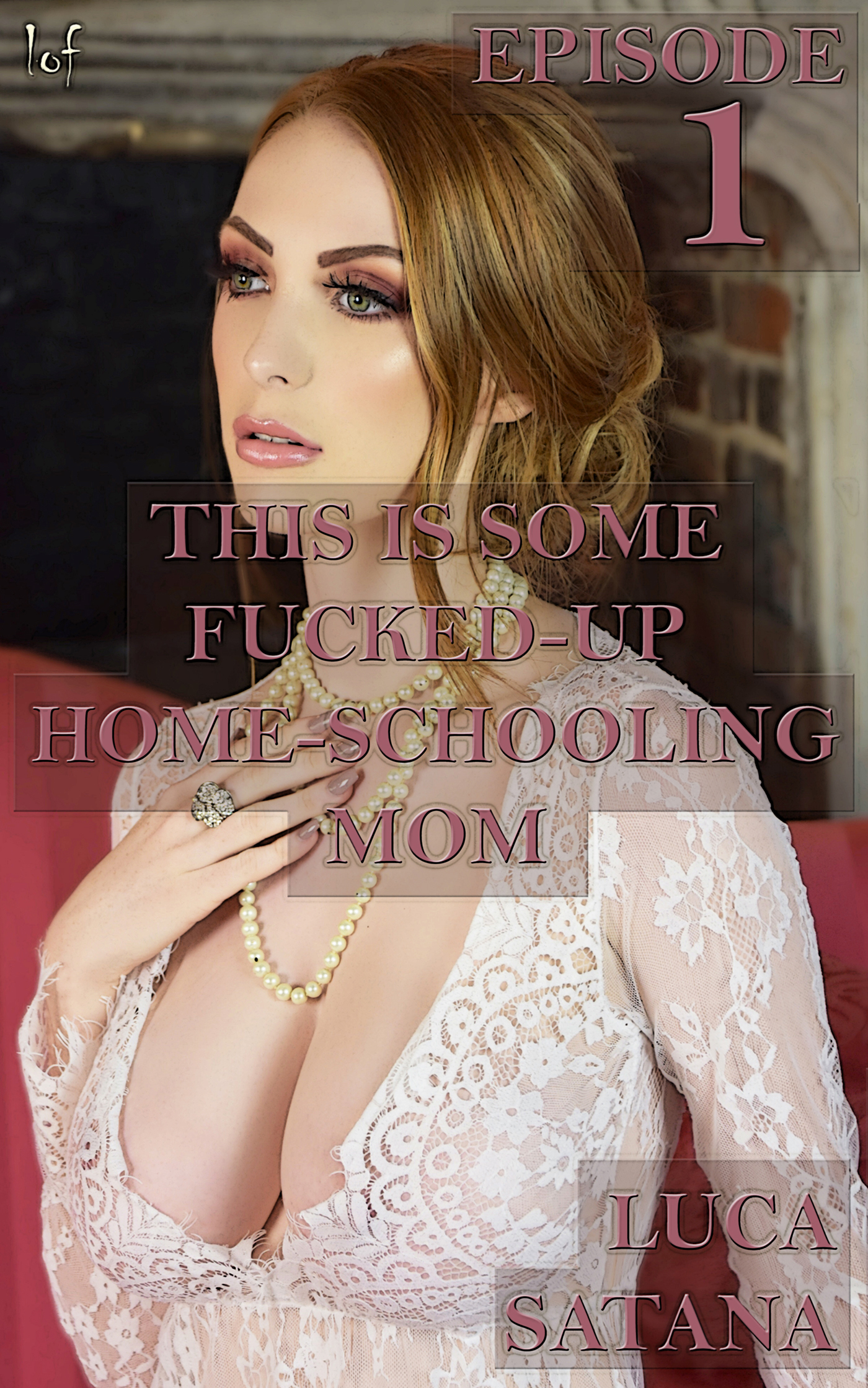 This Is Some Fucked-Up Homeschooling Mom

I’m not weird. Or bad. Just misunderstood. My mom, and my sister for that matter, both think they know me. But, they don’t. I don’t apply myself because I don’t wanna apply myself. I don’t wanna go to school. Why should I? When all I wanna be is, well, a rocker. And, I’m gonna be a rocker. I am!

So, now, I’m stuck. To go along with my dad’s ghost yelling at me at the top of its ghostly lungs, everyone and their mother seems to think I need to finish school, even my twisted fuck of a grandpa, telling my mom if she can’t get me, the heir to some kind of small fortune, to graduate he’s gonna pull the plug on us, financially – what a prick, like it’s my mom or my sister’s fault I don’t wanna go to school.

And, if you ask me, this is all very unrocker. I mean, Angus Young wouldn’t put up with this bullshit.

This Is Some Fucked-Up Homeschooling Mom: 4-Pack 1 (Episode 1-4)

This Is Some Fucked-Up Homeschooling Mom: Episode 1

So, one night, there I was, 18-year-old me, in my room, surrounded by all the things I know and love, heavy metal posters, girly posters, dirty clothes, untouched practically brand-new school books, and whatever the fuck else I want, and that’s when my mom came in.

My mom was super pretty. Super pretty. All of 38-years-old. And, with just about the biggest ta-tas you’ve ever seen, her and my sister, both. Between the two of them, they had enough ta-ta meat to sink the Titanic twice, like a couple titans, they could approach the Titanic and just pummel the living shit out of it from all four sides, smashing it to hell, and then, well, sinking it, twice. But, why the fuck would my titan mom and titan sister wanna do that? I digress. What I mean to say is my mom and sister had enormous ta-tas. That’s all. My mom also had big green eyes and long red hair, again, not unlike my sister.

If anyone cares, my eyes were blue, and my hair was more just blond, like my dad’s – god rest his anger management class dropout soul.

At the moment, my mom was looking super glamorous, with a ton of makeup really upping her overall beauty something fierce, with her hair pulled up and back, and wearing an elegant white evening gown, which was very beautiful, but also quite see-through, allowing for any Tom, Dick, or Harry to get a sneak peek at my mom’s monster tits and monster areolas and nipples, much to me and my fluttering and sputtering deeply confused cock’s dislike, looking as if she might have been coming from walking the red carpet, but in actuality, she was coming, no doubt, from another dinner over at my rich-ass grandpa’s mansion estate.

I was in my usual concert t-shirt, I think Fates Warning, raggedy old jeans, and raggedy old socks, as I lied up against the wall on my bed, rocking to some early AC-DC through my killer headphones and killer stereo. Read More

This Is Some Fucked-Up Homeschooling Mom: Episode 2

“I can’t believe what I just saw…” I barely heard my sister Belinda say, who looked shocked beyond belief, as she stood there in my bedroom doorway.

The thing about Belinda was she could easily pass as my mom’s doppelganger, my mom’s 20-year-old doppelganger, with the same green eyes, long red hair, and, well, as I have mentioned, probably more than once – I’m afraid, behemoth ta-tas. In fact, the only decipherable difference, the only way I could ever tell them apart, was my sister never wore makeup and my mom always wore makeup. Always. And lots of it.

Once my mom had cleaned the last of the misplaced cum off her face, as far as she knew, and discreetly as possible, but not really, deposited it on her tongue, she pulled herself the rest of the way up on my bed, settling in beside me, having never, not once, let go of my big cum-dribbling cock, which caused the cum-dribbling to get quite ridiculous, as it pretty much glazed the back of my mom’s hand and wrist, much to my mom’s consternation, as she, no doubt, desperately wanted to pull a Kiss move and just Lick It Up, but somehow thought it inappropriate, or, at least inappropriate while my sister was standing right there.

This Is Some Fucked-Up Homeschooling Mom: Episode 3

After my fifth shivering shudder in my mom’s beautiful bobbing mouth, she suddenly unmouthed me and rose from the floor and pulled my still very hard, very sensitive cock in the direction of her big bed.

I only half-realized, given my still very heightened state, that my mom suddenly pulling me and my cock away created quite an inconvenience for my equally beautiful sister Belinda, who, at the time, was in the middle of a rather lengthy, rather intricate cock-stroking solo on the thick base of my cock and rock-hard balls, using her long, surprisingly nimble fingers to hit all the notes like she was Eddie Van Halen hitting all the notes on his guitar, before she was left to play the rest of her solo air-guitar-style. And if I knew my sister at all, settling for playing the rest of her solo air-guitar-style was simply not going to do. And, so, sure enough, not to be outdone by our mom, my sister, right away, was on her feet and hurrying around the bed the opposite way, hopping up and crawling across to meet us.

“Okay, Billy, it’s time for bed,” my mom said, using her grip on my big cock to spin and back me onto the edge of the bed.

“Mom?” I said, incredulous, as I tried to peer around her and her big bubbly boobs, which were still wiggling and jiggling free and clear on her chest, so I could see the clock on her nightstand. “It’s only like 10 o’clock.” Read More

This Is Some Fucked-Up Homeschooling Mom: Episode 4

There in the darkness, I settled into a very conflicted state, as my mind kept telling me it was still too early to go to bed, since, no joke, it was only like 11:22p, I mean, only priests and working stiffs, certainly not rockers, go to bed this early, and yet, my mind had no answer for my body, and its apparent and utter exhaustion, especially after coming a wild and other-worldly seven times in my mom’s mouth, as I was starting to think, maybe, just maybe, my sister Belinda might have been right about the connection between coming a bunch in a short amount of time and exhaustion, because I was definitely feeling evidence of that.

And it certainly didn’t help that my mom and my sister’s hands, which, I almost never knew which were which, were almost constantly playing with my cock, but never enough to make me come, not outright anyway, but rather just keeping me floating along, wearily and wobbly across the very edge of coming, like I was floating in a most peculiar way, like I was Ziggy Stardust or Elton John, not to suggest anything about my mom and my sister’s never-ending handjob was homosexual, but just highly effective in sending a young man into outer space, or, in this case, inner space, as I was totally out there, on a space odyssey, no doubt, ever on the edge of ruin.

Until, I suddenly wasn’t, as I, for the eighth time, though I wasn’t exactly privy to exactly when I might come, as I was too busy Silver Surfing, in this heavenly state of flux, and utter lostness, mixed generously with mesmerizing pleasure, until, suddenly I was grabbing at my mom’s head and pushing her down. Read More

Check out the LOF Discounts Page!!!