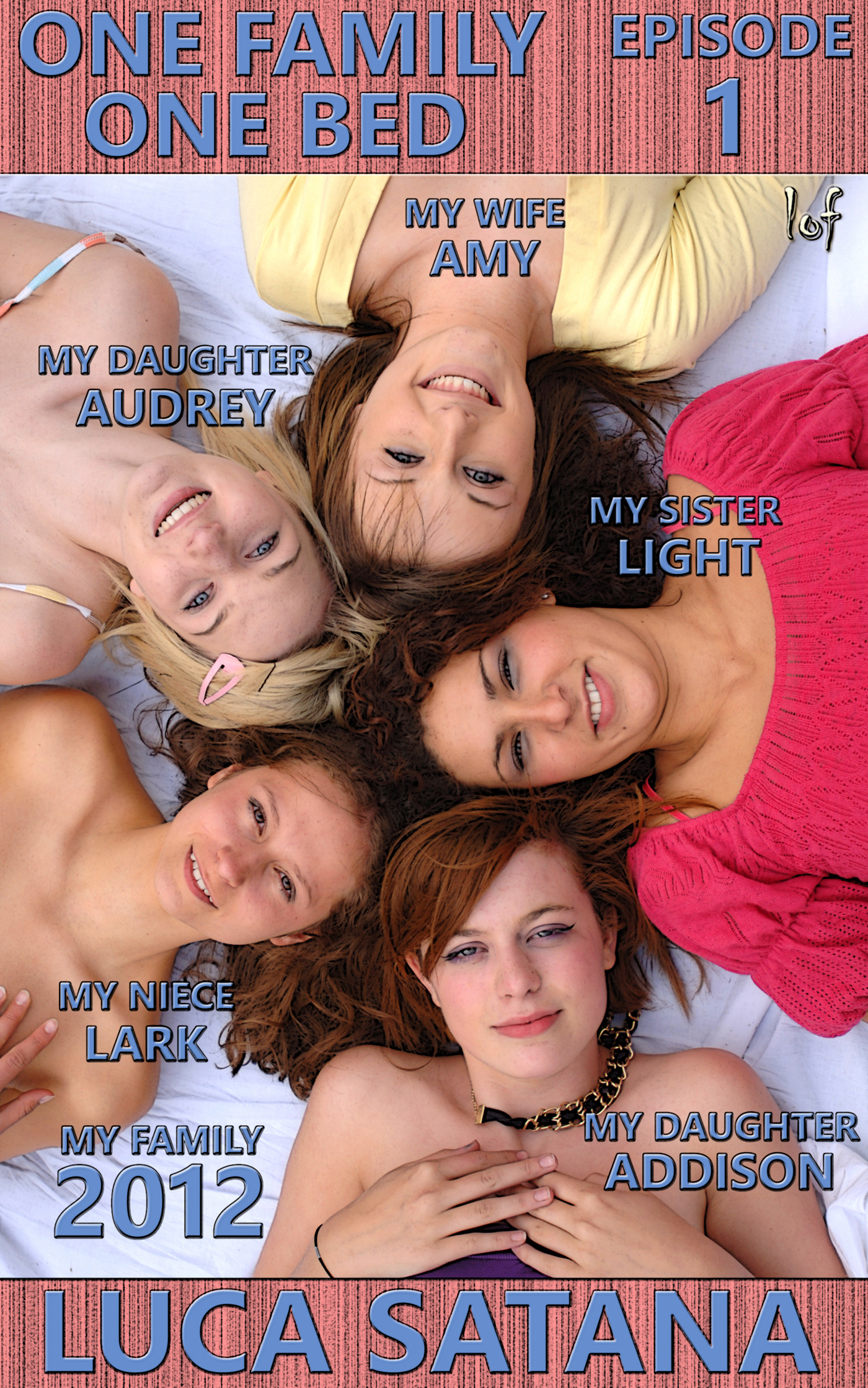 One Family One Bed by Luca Satana

For years now, it’s just been the way we’ve done things in my family. One family one bed. I’m sure, on the outside looking in; it must look strange, or even demented. But after living this way, ever since I turned 18 in 1992, until recently, when I turned 38 in 2012, or even in the future, when I turned 58 in 2032, I can’t see living any other way.

One Family One Bed: Episode 1

There I was, the proud father, sitting on the back patio steps, as I watched Audrey’s bed burning on the bonfire. Audrey was my youngest. And tonight was her 18th birthday.

Among those gathered around the fire, was my wife Amy, my eldest daughter Addison, my sister Light, and her daughter, my niece Lark, who was also 18, as of a month prior.

Audrey was with them, but she looked a little detached, a little nervous, as she nodded and smiled weakly at whoever might be bending her ear at the time, while she intermittently glanced back at me.

Seeing her so nervous, I gestured for her to come over to me.

“Hi,” Audrey said shyly, as her blue eyes danced in the firelight and her short blond hair twisted and turned in the breeze.

“Sweetheart, you know I love you.”

“And I won’t do anything until you want me to.”

Later that night, as I lied there in bed, while my wife and sister took turns sucking my cock, I smiled over at Audrey, who was lying next to me.

Audrey smiled back. She was in a very thin, almost sheer white nightgown and nothing else. Read More

One Family One Bed: Episode 2

There I was, standing by the bonfire, although I didn’t exactly want to get close, since I was pretty sure bed-burning produced toxic fumes. This didn’t stop my brother Gaze and sister Light, as they stood seemingly too close to the fire, and Gaze stood seemingly too close to Light, as he pestered her, like he always did, to no end, while she suffered his pestering, lost in whatever music was playing on her walkman.

Tonight was my bed-burning ceremony, the night I turned 18 and said goodbye to my bed and goodbye to sleeping alone. As the youngest, I was the last to join my family’s time-honored tradition of sharing a bed.

While I stood there, trying to ignore my brother and sister and their antics, I looked past the orange flames, finding my mom Star, who was bringing out more of my bedding to burn. When she saw me looking at her, she smiled. I smiled.

One Family One Bed: Episode 3

After coming the way I came, so hard and for so long, twice, at the hands, mouth, and pussy of my mom, even if, technically, I hadn’t actually fucked my mom’s pussy, just her extremely wet and slippery pussy lips, I guess I was pretty much dead to the world, not opening my eyes again until the early morning light, when I found my mom not unlike she’d been all night, lying on top of me.

By some great miracle, we were alone in the bed. My dad Joseph was off to work. My brother Gaze was off to college. And my sister Light, knowing her, was off somewhere enjoying her freedom away from my brother and my brother’s cock.

Suddenly, I thought of my own commitments. School.

I peered around, looking for the clock, given that I wasn’t exactly familiar with my new surroundings just yet, and eventually found it sitting on the nightstand to the right of the bed, where my dad usually slept. It was 8:15 am. My first class was in less than an hour.

Then, my mom was summoned, and noticed me looking at the clock. “8:15,” she said, informing me.

“Yeah,” I said, a bit emphatically, as if to imply it was late and I needed to get up.

One Family One Bed: Episode 4

It’s difficult to write about the future, since, well, it hasn’t happened yet, but since when has that ever stopped anyone. All I know is, by the time 2032 rolled around, I guess you could say my heyday was behind me. Gone were the days of sharing my bed with my wife Amy, my daughters Addison and Audrey, as well as my sister Light and her daughter Lark, when everywhere I looked or moved was a mouth or a pussy waiting to swallow me up. No longer. After several familial metamorphoses and whatnot, I was now alone. Well, except for my darling little granddaughters Gala and Soiree.

Gala and Soiree were lovely little girls, but a tad rambunctious and a tad over-sexual; which probably isn’t all that surprising considering the stock they came from, as well as the environment they grew up in. Not that they were ever exposed to any of this. At least not while I was around. Miraculously, our family kept the twins pretty well sequestered, a task which became easier and easier, as our one bed for our family became less and less crowded with each passing year.

It was about six years ago, when Gala and Soiree became a regular fixture in my life. At the time, due to some financial difficulties, I was living alone in a one-bedroom house, when, out of the blue, my youngest daughter Audrey delivered Gala and Soiree, who were 12 at the time. At first, I thought it was just another one of Audrey’s impromptu unannounced visits, which usually entailed a mutual much needed release, followed by light conversation, then a little more fooling around, and then vamoose.

However, on this particular visit, Audrey seemed preoccupied, even more so than usual, so much so she skipped the sex altogether, which left me, with my hand on my throbbing cock during most of our conversation, when she eventually found the words to explain where she stood, and what she needed to do, telling me she could no longer handle being a mother, at least not right now, as she began to wax poetic about the prospect of finding herself, or something to that effect. Read More